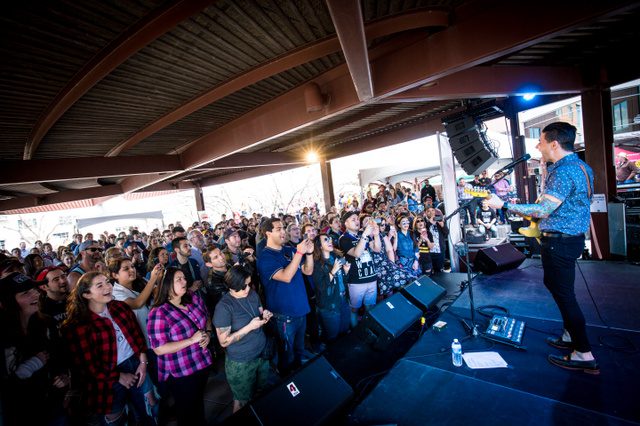 Southwest Invasion is curated and produced by Quantum Collective, a consortium of music industry leaders including Liz Leahy, founder and CEO of Tech Company Section 101, and Dan Silver, VP of Creative at Riptide Music Group and longtime record producer of several well-known artists. The event draws over 12,000 fans annually to see 30 concerts by emerging and legacy bands as well as interact with goods and services developed by microenterprises and socially responsible brands.

“We’ve been really pleased with the QSC systems and everything sounded great,” says Phil Schuster, Quantum Collective’s technical director. Shuster handles all the technical equipment and personnel logistics and city permitting for the event, which is held on the 25,000-sq.-ft. rooftop plaza of the Whole Foods Market flagship store and global support offices. “Production director Rion King from Nomad Sound had the QSC equipment in hand early enough that he could get familiar with it — and it sounded great,” he says.

The PA system on the Plaza Main Stage comprised two hangs each of four QSC WideLine 10 line array modules, says Rion King, production director and one of three partners at Austin-based Nomad Sound, which is led by COO and majority owner Damon Lange. “We also had four GP212-sw double-18-inch subwoofers across the front of the stage,” he says. “Everything was powered by PLD4.5 series amplifiers.”

Onstage, King continues, he had K12.2 two-way self-powered speakers downstage left and right doing double duty as both side fill and front audience in fill. Additional K.2 Series loudspeakers were deployed as floor monitors across the front of the stage and as audience out fill. A KW122 12-inch two-way active loudspeaker atop a KLA181 18-inch self-powered subwoofer provided drum fill.

At the beginning of this year, before the spring music festival season kicked off, King also reports, Nomad Sound added 32 K.2 Series loudspeakers to its rental inventory. “The K.2’s are so versatile. I love the new weatherproof outdoor covers for them, because we have to be ready for inclement weather.”

King, who mixed monitors for the performers on the Plaza Main Stage, says, “I love the K12.2s because of the internal DSP. I was able to run pass-throughs on multiple boxes, then set up individual delays on the boxes — shooting the snare drum with my laser distance meter from the first delay — without having to dedicate delays on a console. To the trained ear, that nuance really makes the difference. It’s about creating a cohesive, immersive environment.” He also utilized the factory presets to optimize the wedges for vocals or instruments, according to each band’s needs.

On the main system, he continues, “I used the mid-frequency shading switches on the back of the WideLine-10s as part of my system tuning. And I delayed the house left subwoofers by about 6 milliseconds to get the energy coupling where most of the audience was. It worked out nicely.”

Quantum Collective and Nomad Audio brought in Philip Ramirez, owner and operator of Headwater Audio in San Marcos, TX, for the second consecutive year to run the Homegrown Stage, which is at the opposite end of the plaza from the main stage. “I had a pair of KLA12 active line array loudspeakers on each side on a pole coming off a pair of KLA181 single-18-inch subwoofers,” Ramirez reports. “And we had five K12.2s for monitors, four across the front and one at the back for the drums.”

Ramirez had a QSC TouchMix-30 Pro 32-channel mixer at front-of-house. “I like it a lot; it’s easy to use,” he says. “It was easy to teach the bands’ engineers how to use it. I had a good turnout of front-of-house engineers showing up with their bands. It was usually a 20-minute sound check then a 20-minute performance — five minutes getting the band up and mixing their first song then the next 15 minutes figuring out what was going to be the next act and cuing their engineer.”

While Nomad Audio handles nearly 70 events during Austin’s annual festival, King was happy to be above the fray at Southwest Invasion’s plaza location. “I would call it one of the most picturesque, perfect venues in Austin. It’s the only space that is in the heart of downtown that sits on a landmark — Whole Foods. You have a good view of the chaos from up there.”